Since 1996, the Dailey lab at the University of Iowa has been utilizing in vitro and in vivo methods to study basic mechanisms of neuronal and glial cell development and plasticity in the mammalian brain using rodent models.  We have particular strength in applying time-lapse fluorescence confocal and multiphoton imaging approaches to study the dynamic behavior of neurons and glia in live brain tissues.  Current work in the lab utilizes a combination of cell biological, pharmacological, genetic, and imaging approaches to study the normal development of glial cells (microglia, astrocytes, NG2-polydendrocytes), and to investi­gate the roles of glial cells in developmental brain injury models including stroke, pesticide exposure, and developmental alcohol exposure. 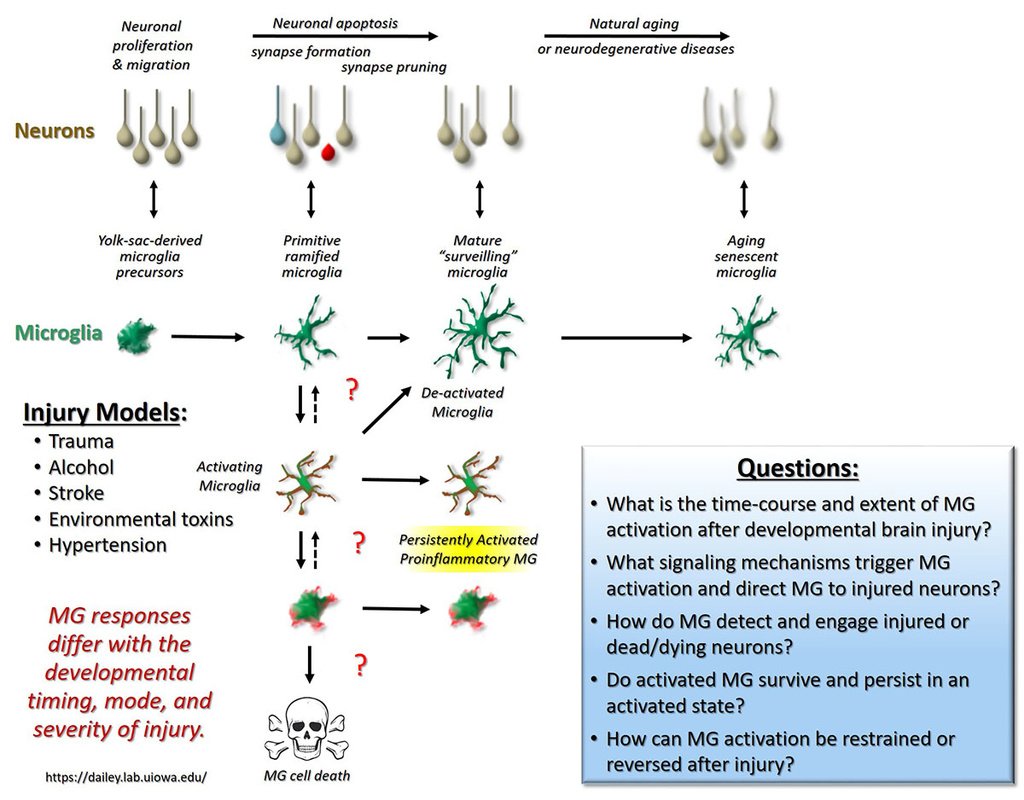 Microglia play many roles during development and in response to brain injurya.  Yet, microglia themselves are also vulnerable to injury.  In one line of research, we are investigating the effect of stroke on microglial cell survival and function, with the goal of under­standing how microglia impact stroke sequelae. Research in perinatal stroke, a leading cause of lifelong disability, has implicated microglia as targets for therapeutic intervention during stroke.  Although microglial responses are complex, some work in developing rodents suggests that microglia may limit brain damage after stroke.  Thus, preserving microglia may provide a strategy for promoting tissue restoration after stroke.  Using an in vitro model of stroke (oxygen-glucose deprivation, OGD) in acutely isolated hippocampal slices from neonatal mice, we demonstrated that microglia are vulnerable to both transient and sustained OGD, and many microglia die within hours after OGD onsetb. Both in vitro and in vivo models are being employed to elucidate mechanisms regulating stroke-induced microglial cell death. Using pharma­cological and genetic approaches in acutely-isolated brain slices and cultured BV2 cells, we showed that OGD causes Ca2+-dependent microglial cell death that is mediated in part by P2X7-type purinergic recep­torsc.  This was the first demon­stration of a purinergic receptor regu­lating microglial survival in brain tissues.  We are currently exploring evidence that adenosine protects against OGD-induced microglia cell death, with a goal of untangling the complex regulation of microglial biology by extracellular purines during development and into adulthood.

b.  Eyo U, Dailey ME (2012) Effects of oxygen-glucose deprivation on microglial motility and viability in developing mouse hippocampal tissues.  Glia 60(11):1747-1760. 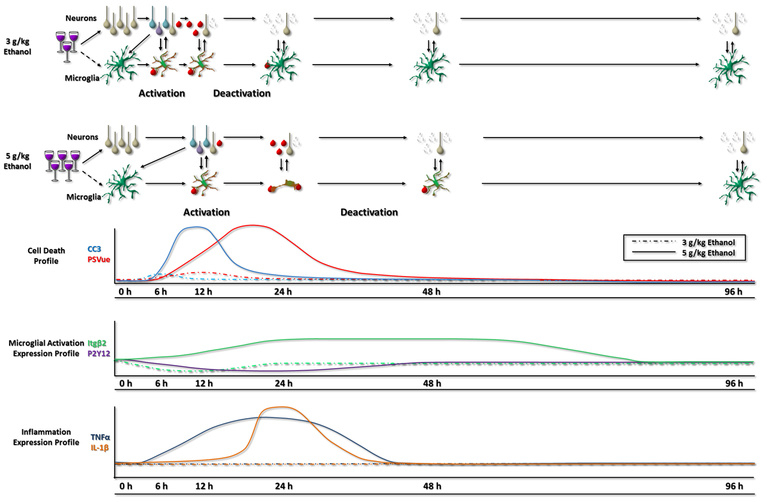 In the developing brain, some neurons normally die by programmed cell death (apoptosis), and nearby microglial cells rapidly engulf and clear these apoptotic cells.  Microglial clearance of dead cells is facilitated by their motility, and developmental changes in microglial motility during the so-called brain growth spurt correlates with developmental levels of apoptosise.  However, neuronal cell death in the developing brain can be greatly exacerbated by acute or chronic exposure to external toxins.  Alcohol is one such widely used toxin.  Indeed, alcohol abuse during pregnancy often leads to devastating conditions known as Fetal Alcohol Spectrum Disorders (FASDs).  Even a single high blood alcohol event during development can induce the death of many vulnerable neurons in the developing rodent brain.  Although recent evidence suggests that neuroinflammation may exacerbate the neural injury, the roles that microglia play in this process remain poorly defined.  Working with collaborators (Drs. Bahri Karacay and Daniel Bonthius) in the Pediatrics and Neurology Departments in the Carver College of Medicine, we have been investigating the response of microglia to developmental alcohol exposure in a rodent model of FASD.  In a recent study, graduate student Kate Ahlers from our lab showed that microglial activation following alcohol exposure in developing mice scales with the level of alcohol, sometimes leading to a proinflammatory state, and that this is a response primarily to the apoptotic neuronal injury and not the alcohol itselff.  Activated microglia contribute significantly to the removal of apoptotic neurons before reverting back rather quickly to a surveillant state.  These studies highlight the amazing plasticity of microglia in the developing brain and raise further questions about the molecular mechanisms controlling microglial activation and deactivation.

e.  Eyo U, Miner S, Weiner JA, and Dailey ME (2016) Developmental changes in microglial mobil­ization are independent of apoptosis in the neonatal mouse hippocampus. Brain, Behavior, and Immunity 55:49–59.

Other environmental toxicants likely also affect brain glial cell function, either directly or indirectly, and this impacts the brain's development, physiology, and response to injury.  For example, pesticide exposure during pregnancy may induce a neuroinflammatory state, mediated in part by microglia, which may in turn increase risk for neurodevelopmental disorders including autism.  In a new line of research funded by the National Institute for Environmental Health Sciences through the University of Iowa Environmental Health Sciences Research Center (EHSRC; NIEHS/NIH P30 ES005605), we are working with collaborators in the Colleges of Pharmacy (Dr. Jonathan Doorn) and of Public Health (Dr. Hans-Joachim Lehmler) to better understand how glial cells respond to pesticides.  We are exploring the general hypothesis that pesticide-induced activation of glial cells leads to a proinflammatory state that induces or exacerbates neuronal injury. 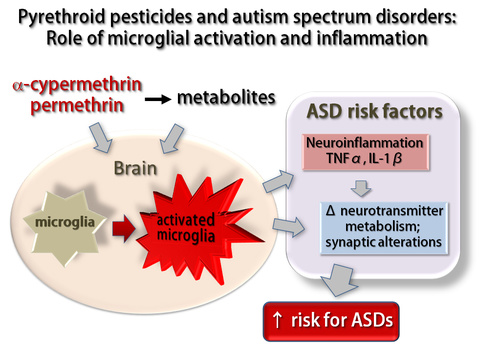